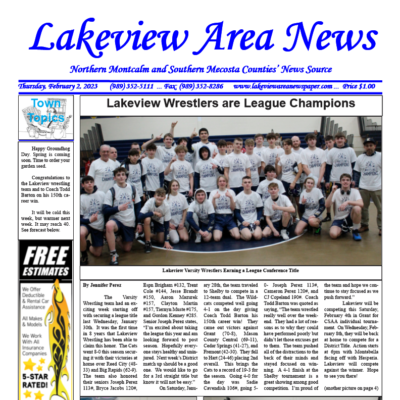 Subscribe to read the full edition online for only $35 per year.

Classified Ads cost $10 for the first week and $5 each additional week as long as there is no changes to the ad. The ad is due the Monday before the Thursday edition of the newspaper. Lost and found pet ads are free. Please send Classified Ads by e-mail: lannewsroom@nullgmail.com.

The Lakeview Area News is looking for one or more reporters and also one or two route carriers. If interested, call 989-352-5111 or email lannewsroom@nullgmail.com.

About the Lakeview Area News

Dick Boomer started the Lakeview Area News in 2006 with his granddaughter Dana Keilholtz. They started the process in January 2006 and the first issue came out March 9, 2006. The original address for the newspaper was 318 S. Lincoln Avenue in downtown Lakeview, Michigan. Dana started doing production and layout and advertising design. Rich Boomer (Dick’s son) and Kim Boomer (Dick’s daughter-in-law, the wife of his other son, Chris) were the first advertising sales persons. Dick Boomer handled the finances.

The first week in April 2006, just four weeks after the first newspaper was published, Linda Huckins started writing for the newspaper. Linda was transplanted from out east with a journalism degree and lots of newspaper and magazine experience. “My dream has always been to open a small-town newspaper, but I didn’t have the capital,” she said. “When I walked into the Lakeview Area News office, I knew I was home. Working there was the next best thing.” That same week, there was a death in the Keilholtz family. Linda volunteered to cover the front desk at the office so Dana and Dick could attend the funeral, and she has been with the newspaper ever since.

Dana needed some time off to help her husband grieve and Linda agreed to fill in. After a few weeks, there was a shift in responsibilities. Linda took over production and layout and handled editorial issues and writers as well as doing some of the writing herself. Rich and Kim had to leave the newspaper because of other obligations, so Dana then concentrated on selling and designing ads. As the paper grew in popularity, the job became too big for Dana to handle alone. Lisa Jensen took over some of the ad design responsibilities and Pam Hufford came on board as a sales person. The 29” broadsheet design was too large and cumbersome. It was decided to switch to a smaller 25” size, which most local newspapers use. At the same time, they switched printers to Pioneer Press in Big Rapids.

Robin Ward came to work for the newspaper when Dick Boomer owned the paper and she stayed on working for Dana and Linda. Robin put in many long hours proofing and editing the paper as well as performing layout duties. It was during those years that she developed the Ruffs by Rosco column expressing the world through the eyes of her faithful dog, Rosco. Robin still writes that column, and it is one of the newspaper’s most popular features. Our many thanks to Robin for her dedication and support of our newspaper.

The response has been overwhelming. Several local people wrote weekly or bi-monthly columns, others willingly submitted articles on a regular basis, and others submitted story ideas.

In October 2007, Dana and Linda bought Dick out and took over the newspaper as partners. The newspaper then became the Lakeview Area News, LLC. They continued running the paper until February 2010 when Dana bowed out and Linda became sole owner. By this time, Pam Hufford no longer worked for the paper. Two other ad representatives joined the staff – Julie Camp and Kristina Marsh. Linda hired other office and layout staff as well. Two are still working at the newspaper – Sandy Dean, who is office/billing manager and ad designer, and Kelly Wright, who is layout editor.

In September 2011, Linda sold the newspaper to the current owners, Gerald (Jake) Kinsey and Charlene Kinsey. The name stayed the same, except it no longer is an LLC. Linda stayed on as Managing Editor for a couple years to run the day-to-day operations, and the Kinseys handle the business end. Linda retired in 2014, but she continues to write articles and helps in other ways. The first issue under the Kinseys’ leadership came out September 15, 2011. Shortly after buying the newspaper the Kinseys started renting their current office space in the Lakeview Family Chiropractors building at 960 S. Lincoln Ave in Lakeview.